Trade Wars and the "Trump Shock"

In which I praise the scientific integrity of Paul Krugman

Paul Krugman has another very good recent New York Times post on the likely outcomes of a trade war:  Thinking About a Trade War (Very Wonkish).   Let me qualify. The first five paragraphs are one more tiresome expression of Krugman's political animus against the Trump administration, plus speculation about U.S. and foreign politics - subjects on which he has no specialized expertise at all.

"The world," he tells us, is so angry with Trump that no foreign leader wants to give him even the appearance of a win on trade. Really? What grounds does Krugman have for such a sweeping assertion when important allies and partners like Japan, Korea, Taiwan, India, Israel, Saudi Arabia, Poland and others have good reason to be on the whole reasonably happy with the Trump administration's foreign policies? But that's the sort of careless rhetoric you have to hold your nose and scoop away before you get to the good stuff in Krugman.

Which we eventually do, when our economics Nobel prize winner tackles three questions on the economics of a trade war.

First, how high might tariffs rise in an all-out global trade war, where large economies like the U.S., Europe, and China abandon current trade rules and start setting "optimal tariffs" unilaterally, in their perceived self-interest? Drawing on studies that use computable general equilibrium (CGE) models of world trade, and on historical experience, Krugman concludes that tariffs could rise a lot, likely to over 40 percent.

Second, what effect will this have on world trade? Also a lot. Using consensus estimates of import trade elasticities of 3 or 4, Krugman does a back-of-the-envelope calculation that world trade could fall as much as 70 percent. That would bring trade down from its current high share of world GDP of around 60 percent to what it was in the 1950s, around 15-20 percent - a true deglobalization.

Third, what is the likely impact of such a trade war on welfare, its economic cost? Surprisingly, given the enormous expected fall in trade, just 2-3 percent of GDP.  Not a lot!  It would be less than half the loss in GDP in the recession of 2008-09. Further, the cost would likely be spread over an extended period, and experienced more as a minor slowdown in annual economic growth than as a single shock or recession.

Let me digress a moment on why I admire Paul Krugman as a man of scientific integrity.  A Trump-hater such as he had every incentive to exaggerate and spin the costs of a Trump-inspired trade war. Disaster! Instead, he says, rather disarmingly:

"I've always ended up being really sorry when I let my political feelings override what my economic analysis says. And simple trade models, while they do say that trade wars are bad, don't say that they're catastrophic."

I had a recent post where I linked to a Krugman piece from 2016 in which he gave a simple explanation for why a trade war is unlikely to cause a recession. While trade protection reorders how labor and capital are employed - typically in a more inefficient way -  it does little in itself to cause a fall in aggregate demand, the proximate cause of most recessions.

Krugman says that estimates of the economic efficiency costs of a trade war are not too different whether you use a full-fledged CGE model or a simple partial-equilibrium supply-demand diagram to gladden the heart of anyone who ever took an Econ 101 Class. (See figure, taken from Krugman's post.) The welfare loss of a tariff is one half the tariff times the fall in imports. With a 40% tariff, an import decline of 70% and imports equal to about 15% of U.S. GDP, the welfare loss would be:  1/2 x 0.4 x .70 x 0.15 = 0.021, or 2.1% of GDP. 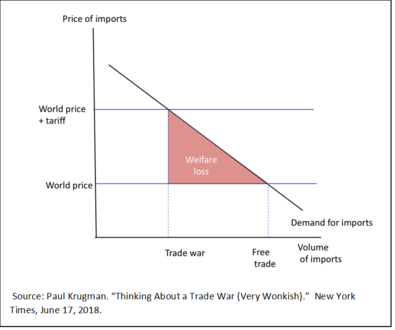 Now a welfare loss of 2-3 percent of GDP is not to be scorned. Other things equal, one wants to keep that GDP. But other things are not equal.  In the United States, rising globalization over the last 25 years also furthered higher inequality, lower wages and employment for low-skilled workers, and lower manufacturing employment.  Deglobalization, would, presumably, work to reverse those effects: more equality, and higher wages and employment for the low-skilled.

So, would you be willing to trade 2-3% of GDP for more equality and a better deal for American workers? I know I might. Economists like to pose an ideal third option: keep globalization and that 2-3% of GDP - "maximize the economic pie" -  then use taxes and government spending to compensate the losers (the poor) from the gains to the winners (the rich). Meanwhile, in the real world, that was not the deal given to workers during the years of globalization. They were more or less left to sink or swim, as best they could.

Unfortunately, Krugman's post doesn't talk about the links between globalization, inequality and the fate of the low-skilled. Instead, he closes by discussing the disruption a full-scale trade war would cause. The industrial structure of the U.S. economy would change, and millions of workers would have to find new things to do.  "This is just the flip side of the 'China Shock' story...it changed the composition and location of employment, producing a lot of losers along the way" he says. "And the 'Trump shock' that would come from a trade war would be an order of magnitude bigger."

This is true.  But the "losers" and the "winners" from a "Trump Shock" would be very different from those in the "China Shock." Before, it was low-skilled workers and smaller towns and cities in the American heartland that bore the burden of adjustment. Then it was the high-skilled and the owners of capital who were best able to capture the new opportunities created by globalization, amassing enormous wealth and political influence, congregating in the gleaming capitals of high finance and high tech on the East and West coasts. If a 'Trump shock' were to begin to reverse some of these fantastic social and geographical inequities, why would that not be something to welcome?